With every blogger out there trying to dissect this NBA season so far and predict the eventual winner, I’ve decided to take a look at the four most intriguing teams in the league (or “The Association”) with a fresh perspective.  By comparing Boston, Miami, Oklahoma City, and Los Angeles to movies, and comedies at that, I think we’ll see a clear picture of who will face each other in the NBA Finals this June. 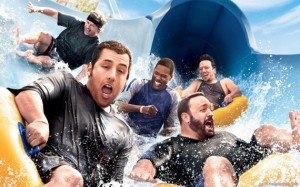 Coming into this season, much like the period before Grown Ups was released, there was an unhealthy amount of excitement for the 2010-2011 Miami Heat.  People believed that never before had three truly great players suited up for the same team.  A similar thought went through most people’s minds when they saw the first trailer for Grown Ups – “Wait a second… Sandler, James, Rock, Schneider, AND David Spade!?”  And just like Grown Ups had trailers to build the hype before the release, the Heat even had their own trailer of sorts.

But early in the season it was apparent that, like Grown Ups, the 2010-2011 Miami Heat may have too much star power at one time.  The Heat went 9-8 in their first 17 games, prompting Coach Erik Spoelstra to change his offensive strategy to letting LeBron and D-Wade take turns on offense.  Just like Sandler and Kevin James couldn’t quite figure out the comedic give-and-take, Wade and LeBron cannot figure out how to co-exist outside the fast break. Heck, the Heat lost at home to the Indiana Pacers. If Grown Ups was an NBA team, I’m sure it’d lose at home to the Pacers also.  To further the analogy, both Grown Ups and the Heat have had a tragically disappointing contribution (Schneider/Chris Bosh).  Sure there are flashes of brilliance, like the streak in December and January where the Heat won 21 of 22 games, or when Adam Sandler inspired the children to get “Chocolate Wasted.” I wouldn’t bet my lunch money on the Heat to represent the East, let alone go all the way.  In the same way, I wouldn’t recommend anyone spend more than $1 at Redbox to rent Grown Ups.

Even if you didn’t like my comparison of the Heat to an over-hyped Sandler comedy, Just Go With It. 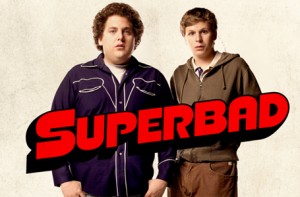 The Thunder are the new kids on the block.  It seems like every night they walk on the court, people are asking themselves, “who are these guys, they’re creepy good!?”  That was just about everyone’s reaction when they saw Superbad for the first time.  “How have I never heard of these guys (Jonah Hill and Michael Cera)?  They are comedic gold! Boop!”  But before we go ahead and anoint Kevin Durant the MVP for the next 10 years and give Superbad a “top-five comedies of all-time” nod, let’s dig a little deeper.

My theory here is that the Thunder’s identity is very tied up in their chemistry, just as the characters Seth and Evan were.  If you’ve seen movies starring Hill or Cera besides Superbad, you’ve most likely been disappointed (see: Click, Year One, Nick and Nora’s Infinite Playlist, Youth in Revolt, or The Social Network. No wait, The Social Network was Jesse Eisenberg).  Using this theory, I’m not sure Russell Westbrook, Kevin Durant, Serge Ibaka, Jeff Green, and the rest of the Thunder would be quite so good if they were split up.  Don’t get me wrong, Superbad was ridiculously funny and had its comedic Hall-of-Fame moments (McLovin’s fake ID scene).  At the same time we shouldn’t forget this is the same Thunder team that took the Lakers to seven games in the first round of the NBA playoffs last spring.

For the record, I do give Superbad a “top comedies of all-time honorable mention,” we’ll see if this type of humor is still funny in 10 or 20 years. 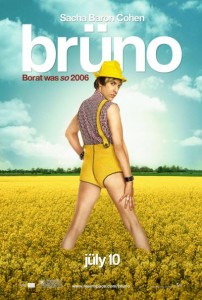 I had high hopes heading into Brüno.  I was among the millions that thought Borat was hilarious and that Sacha Baron Cohen was a visionary.  He was a big name starring in a movie with a genuinely funny concept (think Borat as a gay guy).  But it became very clear early in the movie that Cohen had lost his luster.  At times it seemed he was trying too hard.  He relied too much on a type of humor people weren’t ready to laugh hysterically about.  What Cohen failed to realize was that a huge part of the success of Borat was the supporting cast (the scene where he is in a panel discussion about feminism is priceless because of the genuinely shocked women).
Enter: the 2010-2011 Los Angeles Lakers.  Since Shaq left in 2004, there has been no doubt that this was Kobe’s team.  Like Cohen in Brüno, I thought Kobe would carry the Lakers this season.  He’s Kobe Bryant for Pistol Pete’s sake!  But after last year’s NBA Finals, signs of slippage were apparent on Kobe’s game.  He lost his touch, much like it seems Cohen lost his touch in Brüno.  The stats back it up- this year, the Lakers have lost 4 of 5 games when Kobe has scored more than 33 points.  When he tries too hard, he fails.  Kobe has to rely on his teammates, something he’s never been good at.

The good news, I think Sacha Baron Cohen can recover from Brüno.  The bad news (for Lakers fans), I don’t think Kobe can recover. Even if they embark in a naked wrestling match/chase around a hotel. 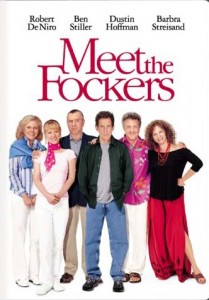 The Boston Celtics are a prime example of what exceptional talent and team chemistry can achieve.  They’re playing the best they’ve played together since the Big Three was assembled.  The chemistry on this team is what separates them from other teams in the East, including the Heat.  The actors in Meet the Fockers were similar.  Left alone, they were successful in their own right.  But when their comedic forces combined, they created a Captain Planet-esque team that people quote for years to come.
Meet the Fockers placed a younger star, Ben Stiller (or Rajon Rondo), with stalwarts Robert DeNiro (Kevin Garnett), Dustin Hofmann (Paul Pierce), and Barbara Streisand (Ray Allen, of course).  Throw in Owen Wilson (Glen “Big Baby” Davis) coming off the bench, and you have yourself a contender.

The Celtics are one of the few teams that can win games on chemistry and instincts alone.  Watching Ray Allen dissect a defense on his way to the three-point record is funnier than a toddler learning his first curse word.

In summary, I think it’s easy to determine the teams that will represent each conference in the NBA Finals based on public opinion of the movies themselves.  In a first round battle for the Western Conference, Superbad (OKC) would take on Brüno (LA).  The series would end in six games, with Superbad (OKC) winning the final game by at least 24 points (the last ten minutes of the Superbad, especially the sleeping bag scene, were legendary).

That gives us Meet the Fockers (Boston) against Superbad (OKC) in the Finals.  Proven chemistry versus new school.  Gaylord Focker versus McLovin.  Everything in the world goes wrong for one guy humor versus teenagers exploring the world they live in humor.

And let’s be honest, everyone wins here.