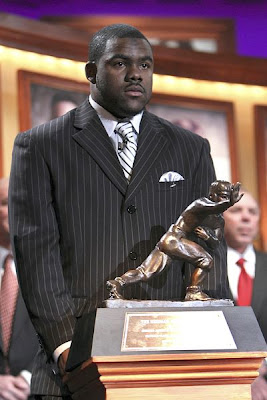 Number 2: Get Rid of coaches having a vote in ANYTHING
Look, I get it. “Coaches watch more game tape than anyone else. They know players and teams better than anyone because they’re living it.”
Except I don’t get it.

Have you ever actually considered a coaches schedule? I have the feeling that, at 8 a.m. on Saturday before heading to the stadium for a 4 p.m. kick off, remembering to “set my Tivo on Versus to watch that Danario Alexander kid from MU play” probably isn’t on the mind of an ACC coach.

I don’t think a Big 10 coach is going to stay up until midnight to watch Toby Gerhart play after he’s been up all day doing all of that crap that coaches are consumed by on Saturdays. Like coaching 70 college kids on national television while also managing a dozen coaches and bringing in recruits and making speeches while also meeting with the press and trying not break any rules in a NCAA handbook that is thicker than OJ Simpson’s criminal record, while also dealing with alumni and the hundreds of other people that he knows through a friend of a friend that are hoping to be hooked up with tickets or a luxury suite or something.
Then, of course, there’s the fact that coaches are the biggest proponents of “not caring about individual statistics,” right?
So consider this: A coach doesn’t exactly get a ton of opportunities to watch teams outside of his conference, and isn’t so nearsighted as to consider player statistics. I must be missing something. When, again, do they actually learn about the players they vote on for awards and All-American teams? Oh, that’s right. They don’t. That’s why we have coaches All-American teams that look like this. You know. Teams that leave off a receiver that had 200 fewer receiving yards over a 5-game stretch to close out the season (Danario Alexander) than the guy who replaced him (Mardy Gilyard) had THE ENTIRE SEASON. Or, to put it another way, Alexander had almost as many yards in the third quarter against Kansas (171) as Gilyard had in his highest yardage game this year (177).
Then there’s the whole Colt McCoy being a coaches first team All-American thing.
And that one thing where coaches are too lazy to actually distinguish which offensive and defensive line positions they’re voting for.
Ones where there isn’t even an honorable mention or 2nd team All-American slot.
And that’s just the All-American team. Lest we forget the fact that the coaches poll makes up a part of the formula that decides your BCS standings. You know, the ones that mathematically rank teams to decide their fate.
I should calm down though because, of course, we’ve seen how careful and meticulous coaches are with their ballots.
So, yeah, I’d consider dropping those guys.

One thought on “College Sucks: Volume 2”