Skip to content
All Sports
March 27, 2009 Jared
I just purchased a spotlight with a custom light-cover-template thingy. The design? It’s a dollar sign, except the two lines that go down vertically through the sign are actually the connector string to a referee’s whistle.
Think of it as the bat signal– but we’re not calling batman.
No, my hero’s version of the bat cave is a prison cell with Bruno and a guy that goes by “Switchblade.”
His version of Robin is a bookie.
His idea of a scandal isn’t going ballistic on a movie set, but affecting the outcome of an NBA playoff game.
His villain for this case isn’t the Riddler, but a giant.
Our hero’s greatest fear isn’t bats, but the idea of dropping his bar of Irish Spring.
The hero? Tim Donaghy. 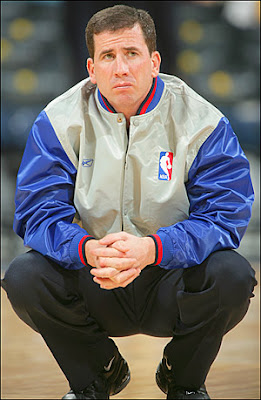 The giant? Hasheem Thabeet.
UConn is favored in tomorrow night’s Elite 8 match-up in Glendale, Arizona against MU by +5.5, and the over/under is 149.5.
Tim, I know you’re reading. I know that laying money on shirts vs. skins games in a Florida pen isn’t giving you that high you need. I know you love a national spotlight. I know it’s been a few years since you really just effed some things up. Here’s your chance.
Mizzou is a dribble-drive team that struggles on the defensive glass. Hasheem Thabeet controls the lane and has grabbed at least four offensive rebounds in 7 of his last 8 games. IF Thabeet stays out of foul trouble, Mizzou stands almost no chance.
Here’s where you come in.
Foul out Thabeet, Tim. I know you can do it. Not only will Mizzou cover, but they’ll ensure that the over is reached.
Can’t you imagine it, Tim? Shaving points on national TV again? Sending Mizzou to their very first Final Four?
You hear that sound? That’s the sound of people helping people, Tim. I get you your fix. You get me a trip to Detroit. I scratch your back, you scratch Hasheem Thabeet.
All of Columbia is counting on you Tim.
I trust you’ll make the wrong decision.