The commissioner of baseball agreed to issue a 6 game suspension to Boston Red Sox pitcher Josh Beckett after he allegedly threw at the head of Angels outfielder Bobby Abreu.
So let me get this straight?

Well great job, Bud! You have yet again found a way to rear your ugly head (and that’s an understatement) into baseball by making a decision that makes absolutely zero sense. 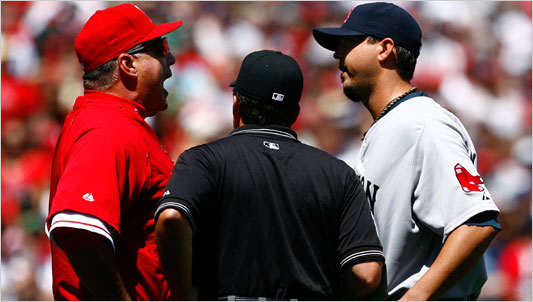 However, don’t take my word for it. Make a decision for yourself.

Abreu was granted a timeout before Beckett’s pitch was thrown. Abreu asked for the time out after waiting in the batters box for an extended amount of time as Beckett was holding Angels third basemen Chone Figgins on second base.

The timeout was granted after Beckett had started his windup, and he finished the pitch as most pitchers are taught to do to prevent any chance of injury.

The whole situation just consisted of a whole lot of name calling, “You’re mother’s a whore!” yells, and some angry “I’m not very fond of you” looks.

ESPN.com had this quote from Beckett:

“I don’t really feel like I’ve done anything,” Beckett said. “I’m not sure what I’m supposed to do. Am I supposed to give him a hug? I wasn’t really in a hugging mood right then. I really don’t know what he wanted me to do.”

I’m not taking the side of the Red Sox in this situation. If the teams were swapped positions, I would still be arguing how ridiculous this suspension is. If you watch the video, it seems highly unlikely that Beckett’s intentions were to throw at Abreu. And he doesn’t even become hostile until after Abreu starts yelling at him.

So tell me again, Mr. Selig, why you are issuing a suspension to anyone on either side of this conflict?

You know how many times this happens in baseball? And to suspend a player 6 games?! For a pitcher that could quite possibly be 2 starts!

If this is the case, then you ought to start issuing suspensions for the other things in baseball that are much worse. Such as players who leave in the middle of games to hang out in the scoreboard, players with really ugly haircuts, players who pull really mean pranks on teammates, and whoever the jerk was that shot and killed G-Baby!

Come on, Bud. If we are going to put up with ou for 3 more years, then you better only start crakin’ down on the issues that really need your attention.