It’s me, Austin. Listen, there has been something that has been heavy on my heart lately. Mainly, because I don’t stop getting Twitter replies for the mistake I made this past Sunday. 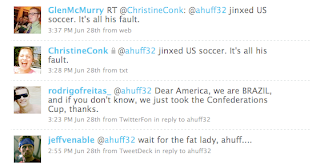 By now, many of you know the story. And if you don’t, you can read it here. Zach made sure to make the story known to all of our KB readers. At halftime of the Confederations Cup Finals between the US and Brazil, I felt pretty confident about my country. We had played inspired soccer throughout the entire tournament. We had already taken down Spain, who had a 15 game international unbeaten streak and a 35 game winning streak overall, and now we had a 2 goal lead at halftime against Brazil, one of the world’s greatest teams!

I know we were the underdog, but we had this in the bag. All we had to do is play 45 minutes without letting Brazil score three times. This was about a sure of a thing as the Patriots winning Super Bowl XLII!

So I pulled out my phone to Tweet. (Yes, I Twitter or Twit or Tweet or Twat, whatever word you use) I had an idea of what to say and I didn’t want to wait for the end of the game to say it because I would have forgotten. So I said it.

I don’t regret Tweeting it… I was confident in my country! I knew we could win. I am a true blooded American through and through!

Well, we all know the story by now. Brazil did the inevitable and scored 3 goals in the second half. America loses.

I’m sorry. Some people say I jinxed us. If that voo-doo crap is true, then I apologize. I got over confident in my team… no, my country! The United States of mother freakin’ America, ya’ll! These colors don’t run!

I’m happy I tweeted what I tweeted! It shows my patriotism! It shows my confidence in my country! In my home land! The country I was born and raised in! (and have actually never left… I would like to travel the world sometime, but just never have… Sorry, off topic) This post started as an apology, but now has turned into an “I Just Realized That I’m Not Sorry, I’m Proud Of What I Did” post.

I will forever love AMURRICA! The greatest country in the universe! 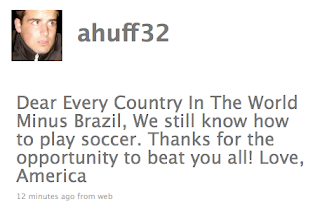 3 thoughts on “Austin’s Apology To America”