Like many patriots out there, I was enjoying a great soccer match between America and Brazil in the championship game of the Confederations Cup. Going into the game the yankee boys were clearly outmatched. It was David versus Goliath, 1980 USA Hockey versus the USSR, Boise State versus Oklahoma, James T. Kirk versus Captain Nemo, Frodo versus Sauron… you get the idea.

Somehow the U.S. pulled out a 2-0 lead going into the half. Not only that, but they seemed to be playing a better game than the Brazilian team. The impossible suddenly seemed possible.
The second half kicks off. Then my phone goes off. Oh great, my fellow co-author of Korked Bats, Austin Huff, has a tweet. Let’s check it out.

WHAAA! My heart sunk. My stomache ached. My head hurt. That was just the jinx that we needed for the U.S. to blow this.

Surely though we could maintain a 2-0 lead. We have played amazing through out the tournament and just completed a great half of soccer.
Flash forward… 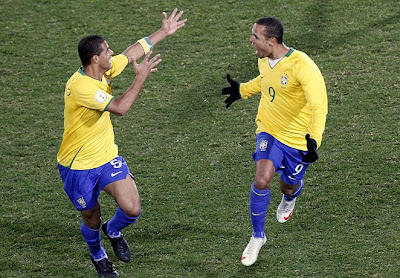 America loses 3-2 in one of the most impressive second half rallies in recent memory. So what does Austin have to say for himself?

Too little too late Mr. Huff. Go back to the Soviet Union. Or give me my Confederations Cup. Until then, tell Ivan Drago hello for me.

One thought on “Austin Hates America”