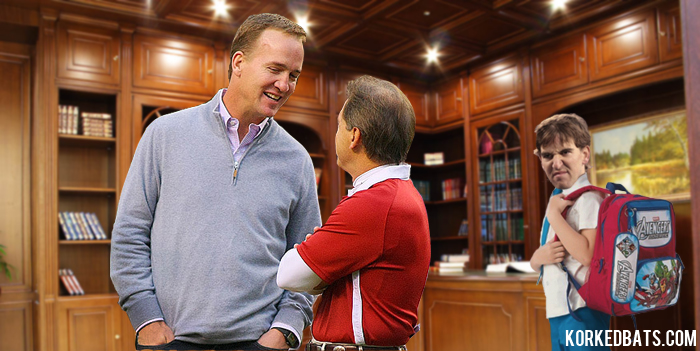 Saban: [talking to an assistant] Make sure to get Emmert to agree to those new rule proposals and for future reference, any time Kiffin has “new plays” he wants to share, just save me a step and go ahead and place those in the trash.

Assistant: Also, your one o’clock appointment is here, should I let him in?

Saban: Yes, send him in. And Deborah, what did I tell you about being in my presence?

Assistant: I shouldn’t stand up straight in your presence.

Saban: That’s right. I prefer to look down on everyone.

[Deborah gets on all fours and crawls out of the room.]

Peyton: Hey coach, long time no see! How are you?

Peyton: What’s the matter coach, you seem like you’re upset.

Saban: Sorry, I was just told my one o’clock appointment was with a prospective recruit. This meeting is now really eating into my offseason regime.

[interrupted by Eli running into the room]

Saban: [looks to Peyton] What is HE doing here?

Peyton: I’m sorry. My parents are making me babysit him today.

Saban: What about Cooper?

Eli: How are you, Uncle Nicky? How are things? Did you hear Peyton made it to the Super Bowl? He lost, but mom says he played great! You didn’t make it to the Super Bowl. You guys lost to Auburn. And then to Oklahoma. I know because I watched with my dad and Peyton. Not Cooper though. Dad doesn’t let Cooper watch football games with us. I think because…

Saban: [interupts] So what are you doing here, Peyton?

Eli: [interrupts] His coach says he wants me to go on a vacation. He says Peyton never take vacations. Which isn’t entirely true. We took a vacation once. To Martha’s Vineyard. In 4th grade. With mom and dad. But not Cooper. We made him stay at home. But Peyton’s coach says he needs to take a vacation. People at the Broncos facilities were complaining that all Peyton does is walk around the office with a helmet on and an iPad, watching film, and bossing people around.

Saban: Then why are you here?

Saban: [interupts] Are you here to help me recruit?

[Saban cracked a smile for the first time all day]

Saban: [inturrupts] Do you have any eligibility left? You know, A.J. just went pro.

Peyton: I just wanted to…

Eli: [interrupts] He wants you to tell him the story!

Eli: What? That’s what you said!

Peyton: I’m sorry. It’s just, I really like that story and after this year’s Super Bowl, I need something to cheer me up.

Eli: After this year’s Super Bowl, you’ll need more than just a story to cheer you up.

Peyton: ELI! SHUT UP! Why don’t you go throw another interception or something.

Eli: Well, the jokes on you, Peyton. I’ve already thrown three since I got here.

Peyton: You shut up!

[Peyton and Eli grapple together and begin wrestling]

[Both Peyton and Eli freeze and stare at Saban]

Saban: Take a seat, and I’ll tell you the story.

[Both Peyton and Eli sit Indian style in front of the recliner with a fitted booster seat in Saban’s office. Saban sits on the booster seat.]

Eli: Can I sit in your lap?

Saban: No. I hate you so much.

Saban: I said no. You weigh too much.

Saban: Alright, boys. This is the story of how I beat Florida.

[Saban begins to tell the story of the numerous times he defeated Florida. After 30+ minutes of detailed story telling, Peyton continues to sit in amazement, grinning like a child. Eli lays fast asleep on the floor while sucking his thumb.]

Peyton: Gee, that sounds awesome. Eli and I both wish we could beat Florida.

Saban: You know I also won three National Titles. Why don’t you ever ask me about those?