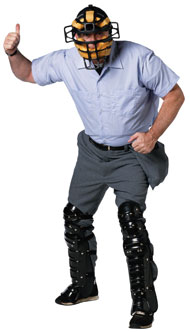 Instant Replay, you are OUTTTA here!

A lot of people have asked me lately, “Austin, do you think they should bring instant replay to baseball.”

I usually reply with, “Do I even know who you are?”

And then I reply with, “Oh yeah, sorry.”

Then I begin to tell him:

“Instant replay in baseball? I want to know who thinks this is a good idea? It sounds like some diabolical scheme of Wile E. Coyote.

This has been a hot topic lately. And yes, I know there have been plenty of blown calls in the playoffs thus far.

But you show me a time when there haven’t been blown calls in baseball and I will show you the year 1743. (The year before the first reference to the sport of baseball.)

Blown calls are a part of the game. So much so that they even include the option on baseball video games now.

It’s like the Trix Rabbit. We are looking for him to fail. Sure it would be great if he got a bowl of Trix, but it’s fun knowing that no matter how hard he tries he eventually will fail.

Leave the Trix for the kids and the computer technology for the pedophiles.

(Not for the umpires.)

We see our favorite batter come to the plate with the bases loaded and the game tied in the bottom of the ninth. He hits a soft two hopper to second. The second baseman fields it cleanly and takes his time to throw to first. Our favorite batter is truckin’ down the line. The throw beats him by at least a step. He is clearly out.

But what do we do?

We still look to the umpire to see if there is any chance he will make the wrong call.

For those of you who say, “Well now we have the technology, we should utilize it.”

Yeah, well we also have the technology to make two teams of robots. We could just watch them play a completely flawless game. Would that not be fun? (Just ask Cardinals fans, they LOVE watching a robot play baseball.)

Also, even with instant replay, there is still the factor of human error. Whether it be from blowing the call even WITH instant replay or having a camera man not getting a good enough shot to have replay be necessary.

I know this post season there have been a handful of horrific calls. I’m not arguing that at all. All I am saying is that this is nothing new.

No, instant replay does not belong in baseball anymore than it already is.”

Then I take a breath only to realize that my dad left somewhere in the midst of my rant.
That’s usually how that goes when someone asks me about instant replay in baseball.

Leave the game how it is.
If you don’t agree with me, than instant review this post until you do. The inconclusive evidence is there.

One thought on “Against-it Replay”