For the first time since 1997 with Sandy and Roberto Alomar when Cleveland played Baltimore in the ALCS, two brothers are competing against each other in the NLCS. That seemed like a loaded sentence. But the Nola’s are making history, I guess, which means this low-level storyline is reason for us to be invested in a Championship Series day game. Normally, these storylines are boring to me, aside from Brady Quinn’s sister dating A.J. Hawk and cheering for them in the Fiesta Bowl back in the day.

Also, quick aside: you still can’t convince me that’s anyone other than Brady Quinn in a wig. Lady Quinn, if you will.

However, one thing about this boring storyline that has roped me in is Austin and Aaron Nola’s mom. Not only does she look like the epitome of mom. Like if you typed “mom” into a 3D printer, this is what it would spit out.

The glasses, the makeup, the tiny necklace, the skinny strap purse on her arm, the haircut that just screams, “I am a mother.” Without looking it up, I’m going to guess her name is something like Debbie, Theresa, or Carol.

Ok, I just looked it up after typing that last sentence. Her name is Stacie. Still fits, IMO.

But as the tweet above points out, Nola dad is all for his two sons. Showing his pride with every piece of fabric he wears. But Stacie? Nah, you’re not about to mess with the generic navy blue top she got on sale at Ann Taylor Loft that she had laid out to start the day. She doesn’t care if her sons are a couple of wins away from playing in the World Series. She’s going to wear the most generic looking outfit in the entire stadium. But look, we’re not going to get on someone for their fit. At least not solely. Because it was also how Stace-dog reacted to the game she was there to watch.

Look at her. Just look at her. Causally clapping as her son blows the lead. With some major “just happy to be here” energy. Does she even know what she’s watching? Is she only clapping because everyone else is? Her one son just blew it for everyone. And it wasn’t even her other son, Austin Nola, who tied it up. Does she think Juan Soto is her kid? He looks nothing like you, Stacie! None of this makes sense.

Look, I’m not here to parent shame anyone. But just have some wherewithal to know the situation and not get caught on screen in your most generic TV mom fit clapping on national television as your son poops the bed. 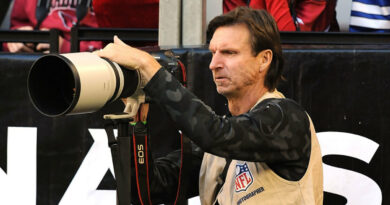 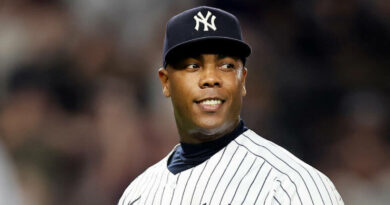 Have You Ever Been Placed On The I.R. For An Infection From A Leg Tattoo? Because Aroldis Chapman Has!