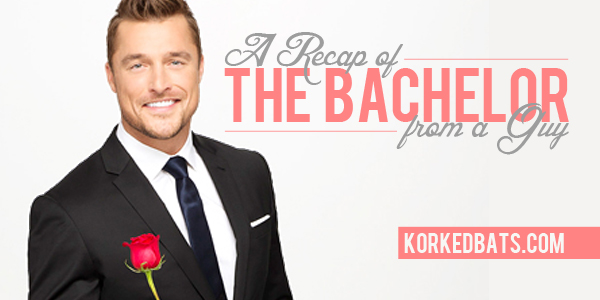 This week’s episode picked up where we last left off, with Kelsey on the ground moaning like a drunken frog. As the paramedic arrived, Kelsey asked to speak with Chris. Smooth move, Kels. She told the paramedic she was having a panic attack, yet she still managed to make a joke about the brownies being store-bought. Just so you know, you don’t make jokes about the brownies being store-bought if you’re having a panic attack. That’s a dead giveaway. When Chris arrived, she told him she was just overwhelmed. Literally no one believed her, but in her defense, if everyone found out you were a serial killer, you’d be overwhelmed, too. Seems like every girl on the show is on #TeamKelseysDeadHusbandIsFake.

Since we didn’t have a rose ceremony last week, we got to begin this week with one. The following received a rose:

Mackenzie and Samantha were sent home. This is good news for Samantha, because she’ll probably get more airtime at home than she ever got on the show.

Just when you thought the setting of this week’s episode couldn’t be any worse than last week’s Santa Fe, New Mexico, setting, Chris announced that they’d spend the week in South Dakota, which is actually ranked second in the nation of states that people usually forget.

They stayed in the small town of Deadwood, which Chris described as the “perfect place to fall in love, or get shot in the back,” which is convenient, considering he just gave Kelsey another rose.

The first date card was addressed to Becca, and it read, “let’s take a shot at love,” which ironically is the only shot Jordan didn’t take while she was still on the show.

This date was pretty uneventful. Even Brian Williams couldn’t have made up anything about it to make it seem more exciting.

Meanwhile, back at the house, a few of the girls confronted Kelsey, because apparently that’s what girls do. I don’t know. If it were me, and I had the slightest hint that Kelsey went Norman Bates on her husband, I’d leave that girl alone until the show was over. I probably wouldn’t even acknowledge her at the “Women Tell All.” That is, if I lived to see the “Women Tell All.”

Carly, Kaitlyn, and Whitney were sitting on the couch talking about Kelsey when she walked in from probably sharpening her knives or something. The girls sat her down and began telling her how they felt, and by “they,” I mean just Carly and Whitney. Kaitlyn was just sort of sitting there. The girls basically went all Janis Ian on her by telling her she’s a mean girl. Kelsey took it well, but later said, “I get it. I am blessed with eloquence, and I’m articulate and I use a lot of big words because I’m smart.” I’m not sure where she was going with that, but apparently, the only thing Kelsey took away from this mini-intervention was a few more names to add to her hit list.

The group date card read, “let’s make sweet music together,” and it was addressed to every girl except Ashley I. and Kelsey, which meant they were slated for the two-on-one date later on in the show.

Chris met the girls in downtown Deadwood, which from the name alone probably sounds like a thriving metropolis, but guess what? It’s not. Chris told the girls that they’d be writing country music songs with help from world-famous country music superstars Big & Rich. Seems like quite the oversell for a band with only one hit song. Big & Rich, really? What? Was Chumbawamba busy that weekend?

The girls were instructed to write songs about Chris, and poor little Jade was having trouble. So Big or Rich — I honestly don’t know which one is which — had Jade run a half marathon down the cobblestone streets of Deadwood, yelling things like, “I’m in Deadwood!” and “I’m with the man I love!” and “When will Big & Rich get paid for this, ABC?” If running down the street while yelling things is the method Big & Rich use to write songs, it’s suddenly become clear why they only have one hit.

What we learned from this date is that Chris is a terrible singer. Britt wasn’t that bad, but she was a little off key. Whitney was awful, but not Florida Georgia Line awful. Kaitlyn rapped. Megan wasn’t bad, but she’s from Nashville. Carly was good. Like, really good. I’m talking cruise ship singer good. Jade was terrible, but in a cute way, because she’s adorable.

Chris and Britt spent the concert dancing, kissing, and pretending to know the words to the songs. By the end, Chris gave Britt a rose. When they got back to the other girls, it was really awkward, like watching Fifty Shades of Grey with your parents awkward.

To read more (including the epic 2-on-1 date), click here.