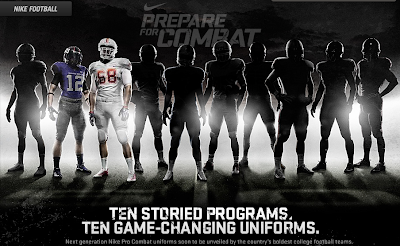 There are ten Nike promo schools across the country. Basically, when Nike comes out with a new product or would like to test something new, they send them to these ten schools.

The ten Nike promo schools are:

For the rest of the season, whenever one of these programs plays a school that is a non-Nike school, they will wear specialized Nike Pro Combat uniforms. (Except for the Florida State v. Florida game, where both Nike schools will rep the NPC unis.)

So far, only two school’s NPC unis have been released on Nike’s website, Texas Christian and Virginia Tech. On the site, you can check out each uniform in depth and look at each unique aspect that makes it up.

I must say, I was extremely impressed with the intricate details of the uniforms…

…Until I came across a certain part of Virginia Tech’s unis.
Take a look for yourself. 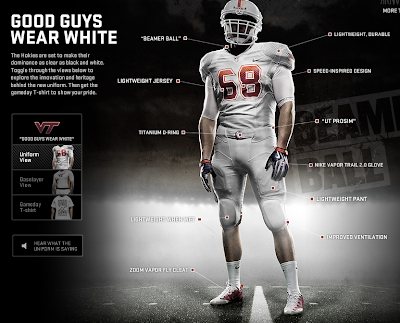 Notice anything unusual or not right?

Click on the picture and take a closer look.

Did you notice the tag for “Beamer Ball”? 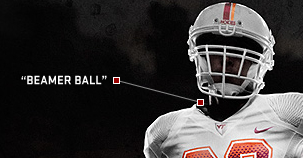 “Beamer Ball” is in reference to VT’s current head coach and most successful coach in school history, Frank Beamer. “Beamer Ball” is the nickname for his style of play which has been known to focus on defense and special teams.

I’m not at all against Nike printing “Beamer Ball” on the inside collar of their jerseys. I think that’s a cool idea. I just feel that Nike should re-evaluate where they are printing it.

Beamer Ball. As in Frank Beamer. As in burn mark on lower right side of his chin/neck. As in that picture above looks just like this picture below: 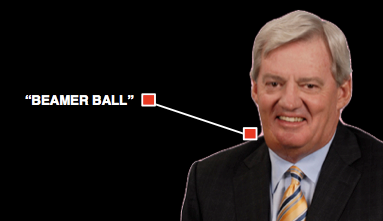 Anyone else catching my drift?

I mean the “Beamer Ball” is printed right where Frank Beamer’s well-known burn scar is.

Did no one else at Nike even realize or think about this board room blunder?

I’m sure one guy did. And I’m sure when he tried to speak up about not going through with the idea in the meeting, the head of the project ignored him and said: