We here at Korked Bats want to take all of you bah-hum-buggin’ Ebenezer Scrooges on a Christmas Karol adventure of our own. An adventure that will take you through the past, present, and future of American sports. So let’s go.

The Ghost of
Sports Past

The Ghost of Sports Past is a lot like The Ghost of Christmas Past. Very mystic, kind of creepy and looks a lot like an Asian ginger. This ghost will share with us how different sports were.

Olympics
In swimming, Mark Spitz (with that killer ‘stache) wins 7 gold medals at the Olympic Games in Munich in 1972. He celebrates by dancing disco with John Travolta (probably). The gold medal winning basketball team from the 1992 Olympics in Barcelona is nicknamed The Dream Team (And no not after the 1989 Michael Keaton film).

College Football
In a day when college football had ties, it was all about showing midriff, face paint, recruiting anyone who has the talent to play the game, and The Program. It was a time when Notre Dame was all about Touchdown Jesus and the Big Ten was looking for an 11th team. Oh, and a guy named Joe Paterno was coaching Penn State.

Pro Football
The NFL in these days were filled with entertainment, hard hits, and astroturf. And of course there was the XFL. Designed by Mr. Vince McMahon himself, it’s safe to say the XFL was the only sport in which someone broke their collarbone on the opening “coin toss”.

Pro Basketball
Basketball in these days was a wondrous thing. Guys wore short shorts and put up 100 points a game! The ABA was around and had the most ridiculous team names and logos. A guy named Dennis Rodman was the league’s human Picasso painting.

The Ghost of
Sports Present

The Ghost of Sports Present, who looks like the Burger King mascot if he put on 50 lbs., is considered to be just like The Ghost of Christmas Present.

Olympics
In swimming, Michael Phelps wins 8 gold medals at the Olympic Games in Beijing in 2008. He celebrates by smoking weed. The gold medal winning basketball team from the 2008 Olympics in Beijing is nicknamed The Redeem Team. USA Basketball in the years between 1992 and 2008 was about as embarrassing as your six-year-old son revealing your entire diabolical plan to get famous for everyone to hear on live television. But in 2008, USA Basketball WAS BACK (A Dinosaur’s Story).

College Football
Today, a day in which college football has overtimes, college football is all about instant replay, futuristic throwbacks, recruiting any age that has the talent to play the game, and We Are Marshall. It’s a time where Notre Dame is all about Field Goal Jesus and the Big Ten is looking for a 12th team. Oh, and there is still a guy named Joe Paterno coaching Penn State.

Pro Football
The NFL today is filled with a lack of entertainment, hard hits that get penalized, and field turf. And of course there is the UFL. A league designed to help develop players much like NFL Europe used to do. However, we also saw the death of a league in these days. You may be gone, AFL, but you will never be forgotten (hopefully, it will be back).
Pro Basketball
Basketball today is a not as wondrous thing. Guys wear long shorts and put up 81 points a game. A lot of the ridiculous team names and logos from the ABA have developed in to modern day teams with new logos (except the Spurs). And finally, a guy named Chris Andersen is the league’s human Picasso painting.
Sex Scandals
Tiger Woods

The Ghost of
Sports Yet To Come 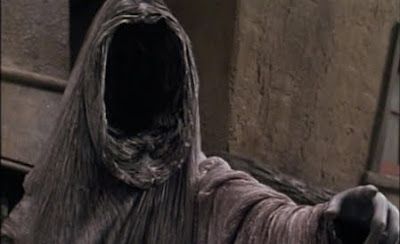 I’m not going to lie, The Ghost of Sports Yet To Come is flat out scary! The dude looks like Death. However, this ghost is just like The Ghost of Christmas Yet To Come in the fact that it shows us what will become of what has happened in the past and present.

Olympics
In swimming, a guy named Arthur Curry wins an unprecedented 15 gold medals at the Olympic Games in Rio De Janeiro in 2016. He celebrates by partying with his ocean friends near Atlantis. The basketball team from the 2016 Olympics in Rio is nicknamed The Pre Teen Team. As NBA players continue to get younger and younger. The youth movement doesn’t work, however, as the team gets routed in every game they play. After the Olympic Games, the team admitted they were not ready for the ten foot goals saying, “It’s not what we practice on.”

College Football
Eventually, college football will be all about instant preplay (think about it, it’s deep), throwback throwbacks (helmets included), recruiting anything that has the talent to play the game, and Brian’s Song 2, Brian’s Revenge. It’s a time where Notre Dame is all about New Coach Jesus and the Big Ten was looking for a 16th team. However, the conference finally comes forward and admits they no longer have 10 teams. They finally change their name to what they REALLY are, the Little Sixteen. And of course, there is STILL a guy named Joe Paterno coaching Penn State.

Pro Football
The NFL eventually fires commissioner Roger Goodell after it is discovered that he works for the Russians. However, by this time it is too late and Goodell had already turned America’s favorite game into a non-contact game much like a mix between basketball and electric football. The AFL is finally back, but due to money issues, they are forced to play in high school gymnasiums until they get back on their feet.

Pro Basketball
Guys in the NBA begin to wear shorts so long that they would be considered capris in today’s age not to mention players put up 20 points a game (players get real selfish in the future). And also, a guy named this thing is the league’s human Picasso painting.