On Sunday, reports surfaced saying that before Randy Moss was traded from the New England Patriots to the Minnesota Vikings, quarterback Tom Brady and Moss got into a verbal scuffle.

“One of Brady’s problems with Moss was his behavior as a Patriot. Then one of the things that was overheard was Brady telling Moss he needed to cut his beard. Moss countered, you need to get your haircut. You look like a girl.”

However, USA Today wrote this morning that Tom Brady said the incident “certainly” didn’t happen. So who knows if this incident ever happened or not? We’re not here to pursuade you one way or the other. Nope, that’s not what we want to do. We’re here to give you the full transcript of the altercation. You know, the parts that we’re (falsely) reported on CBS on Sunday. Then you can decide for yourself what you believe.

Randy Moss: Hey thanks, Tom. You too. You really we’re whizzing those passes out there.

Brady: [laughs] Thanks man! Well, I’m just glad I actually someone tall enough to ride rollercoasters that I can throw too.

[Wes Welker walks by, over hears him, and drops his head before walking off.]

Brady: [laughs] Yeah, I heard the hotel has an INDOOR pool! 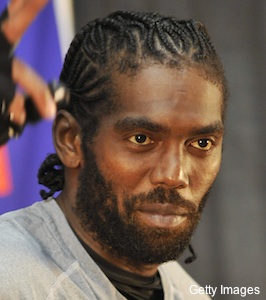 Moss: I’m about to get my swan dive on. Ya heard?!

Brady: Well, you might want to trim that beard for the flight down there.

Moss: [his smile fades] I’m sorry, what did you just say?

Brady: I said you might want to trim your beard. You know, so we can make it through airport security scotch free.

Moss: [stands up] What’s that supposed to mean?

Brady: You know, airport security is really uptight towards people who look lik…

Moss: [interrupting Brady] I KNOW WHAT YOU MEANT BY IT! Why did you say it?!

Moss: Well, you need to cut your hair! You look like a girl!

[Both of them are now chest to chest.]

Brady: Hey! I’m going for the Justin Bieber look! And he is NOT a girl!

Moss: He hasn’t hit puberty yet, so he looks like one!

Brady: That’s not fair! We all were adolescent boys at one time!

Moss: Yeah, and some of us still play like adolescent boys! [points to Brady]

Brady: What the heck?! You just said I was “whizzing the ball” out in practice.

Moss: I was lying.

Brady: You are such a ca-ca face!

Moss: At least I didn’t need Drew Bledsoe to get hurt before I got to start in the League.

Brady: Oh that is IT!

[Brady then lunges towards Moss but the scuffle is quickly broken up by teammates.]