The following is a guest post from comedian Rob Fee.

Be sure to check out more of Rob’s work at RobFee.net. 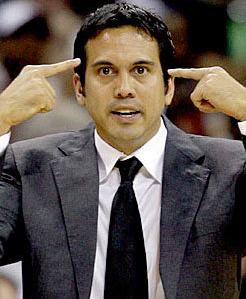 This is an inside look into the day in the life of Miami Heat head coach Erik Spoelstra. All times are Eastern Standard Time.

Erik Spolestra wakes up in a canopy bed in his parent’s attic. He has the entire room decorated with memorabilia from the 90s television program Dinosaurs. He’s wearing a homemade sweater that reads “Not the Mama” across the chest in puff paint.

Erik uses his hour of allotted internet use (from his parents) to look up trivia facts about the movie Finding Forrester. Writes down his favorite lines in a notebook labeled “How to Get Haslem to Like You As a Friend.”

Erik has to take a second shower because his mom noticed dirt on his fingers. Erik storms off and yells “It Brownie Bites mom! Parents just don’t get it!” then sneaks another Brownie Bite out of his Dinosaurs fanny pack.

Erik prank calls Pat Riley. Says his name is Speric. Pat Riley calls him a “failure on a species level.”

Erik sneaks onto the internet via his Cricket cell phone. Unsuccessfully searches for “cool slacks like on You Got Served 2” for an extended amount of time.

Erik gets to the arena, spends an hour asking a concession stand worker to “explain nachos” to him. Every time they turn their back he fills his pockets with popcorn kernels.

Erik has all the Heat players gather around a dinner table. He turns on that Day-O song and tells Wade he needs to “Beetlejuice it up!” then yells “Did I do thaaaat?” For some reason he confused Beetlejuice with Family Matters. Juwan Howard is laughing way too hard.

Erik asks Lebron what his favorite candy is at the moment. He says it’s Snickers. Erik turns and looks directly into an ESPN camera and says “Gimme a break!” Suddenly Kit Kats fly in the room from every direction. It’s like a delicious Paranormal Activity. Bosh immediately eats like 6 Kit Kats.

Erik has an assistant take the team out for a shoot-around while he turns off every light in the locker room. Erik counts to 4 and starts screaming. Said he still can’t do it, too scared Tails from the Sonic the Hedgehog video games will come after him. The assistant coach asks why Tails? Said Tails touched him in sensitive areas when he was a kid. The assistant feels no need for further information and leaves a weeping Erik Spoelstra to himself.

Erik coaches the Heat’s game in its entirety despite being distracted by the following thoughts throughout the entire contest:

– Can I get AIDS from my own blood?
– Would Kanye West be cool with me if he wasn’t dead? (He’s not dead. Erik is confusing Rodney King & Kanye West)
– How many times is too many times to have the fire department get you down from a sycamore tree you underestimated in height?
– If corn can turn into popcorn, what other foods can I scald and create a delicious treat?
– I wonder what the cast of High School Musical was like off-screen? Did they hang out? Any secret smooches? Gossip, gossip!

Erik does a post game interview and struggles to keep his composure when one of the reporters is named Harry and another is named Ron. “Better go get them horcruxes.” he thinks to himself. He’s giggling so much, he’s almost crying.

Erik finds a Swiffer tied to the front doorknob with a post it note attached. The note reads:

You swept my heart away.
You are my best friend.
Do you like karate?

Erik shadow boxes for a moment, does the Rocky pose and yells with excitement. He glances over and catches Bosh and Wade laughing in the bushes. They faked the note. Erik kicks the Swifter into the bushes and proclaims “Homey don’t play that. Y’all don’t know about Reginald!” No one knows who Reginald is. Erik runs up stairs and hugs a sock filled with Starburst wrappers with a face scribbled onto it. “Never leave me Lil Harold Miner.” He cries deeply all over his canopy bed sheets. Erik slips on his Third Eye Blind footed pajamas and calls it a night.

Just another day in the life of Erik Spoelstra.

This guest post was created by comedian Rob Fee.

For more of Rob, check out a lot of his work on his website: RobFee.net

4 thoughts on “A Day In The Life Of Erik Spoelstra – By: Rob Fee”