Skip to content
MLB
September 29, 2008 Austin
NOTICE:
I’m going against my motives here and am going to be biased with this post. So allow me to apologize in advance. HOWEVER, everything I say I am going to backup with facts and stats to help my point be heard. I’m not just saying these things without reason.

Major League Baseball just finished it’s final week of regular season play which brings up the debate about post season awards. You know, the Cy Young, Comeback Player of the Year, Gold Glovers, Silver Sluggers, etc. But we aren’t about to get into a debate about each one of those awards. We “don’t have the technology or the steady hands to perform a procedure like that!” (Sorry, I had to slip that Superbad quote in there)
But today I want to bring up the debate of this years MVP for the National League. There have been a lot of worthy candidates this year. Of course there is the Howard, the Chipper, the Braun, the Pujols. And this year we can’t forget Chase Utley and Aramis Ramirez.
But how about the other Ramirez? You know, the National League’s newest member? The man who made the jump from the AL 45 minutes after the trading deadline. The man who puts Bob Marley’s dreads to shame. The man who single handedly turned a team from an offense-less sub-.500 baseball club to the National League West Champions. The man who is the best #99 to hit LA since Wayne Gretzky, possibly even better. 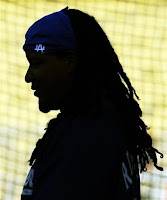 I’m talking about Manny Ramirez.
Now normally I’m a strong believer in the fact that to win the National League MVP you must be in the National League for the entire season. But 53 games is enough, right?! However, I’m also a strong believer of the MVP being on a team who has either clinched their division or at very least made the playoffs. Some of this year’s strongest candidates were on teams that didn’t make the playoffs.

Well, with the impact Manny Ramirez has made in Los Angeles (and I’m not talking about Anaheim-Los Angeles… Stupid Angels) this season, I’m starting to change my beliefs.
Lets start by sharing his numbers since the trade, in 49 Games:
Batting Average:
.395
On Base Percentage:
.488
Slugging Percentage:
.746
Hits:
70
Home Runs:
16
RBI’s:
51
(That’s just over an RBI a game. And for an offense that was really struggling before the trade deadline, that’s huge!)

Also, one thing that stats can’t show is the energy he brought not only to the city and fan base, but to the clubhouse. Manny Ramirez is a winner and quite possibly one of the greatest right handed hitters of all time. You can’t argue that. He brought his winning mentality and his two World Series rings to a team who has only won one playoff game since 1988 and he helped the Dodgers win the NL West for only the fourth time since 1988. The Dodgers have a young team and for a veteran such as Ramirez to come in, really helped the Dodgers to not only win, but to have fun while doing it.

Now a lot of people don’t like Manny. What happened in Boston was pretty ugly. Some say he played his way out of Boston. I’m not here to argue that. I’m just saying since his trade, he has been the National Leagues best player.
If you disagree, then who HAS been the NL’s best player?
Chase Utley – Philadelphia Phillies
Started the season off very very hot, you can’t argue that. But did anyone hear from him in the second half? He finished with average numbers… not MVP like numbers.
Ryan Howard – Philadelphia Phillies
Has a better chance than Utley for the award and helped the Phillies claim the NL East Title with 48 homers (1st in the NL) and 146 RBIs (1st in the NL). However, Phillies tend to cringe when he is at the plate as he tied his own Major League record of 199 strikeouts and only a .251 batting average. Womp, womp.
Chipper Jones – Atlanta Braves
When Chipper is in the lineup he is quite a threat… However, he is out of the lineup a lot. We are looking for the Most Valuable Player, not the Most Injury Prone Player (Ken Griffey Jr. would also be in the running for that). In his defense, Chipper won the batting title with a .364 batting average.
Ryan Ludwick – St. Louis Cardinals
Ludwick had a great season. He has an argument for putting up MVP like numbers, 37 homers and 117 RBIs, .299 average. Unfortunately, you’re not going to win MVP when you aren’t even the MVP of your own team…
Albert Pujols – St. Louis Cardinals
…which brings us to Mr. Pujols. His numbers are very close to Ludwick’s but the thing that puts Pujols ahead is his .357 batting average which gave him the second best average in the league. If the Cardinals didn’t fade out at the end of the season, Pujols could possibly have it in the bag.
Ryan Braun – Milwaukee Brewers
Most people think that anyone who thinks Ryan Braun should win the MVP is a Brewers fan. Well, they could pitch a strong point. In only his second year, Braun posted 37 homers and 106 RBIs. And he helped his team to get the Wild Card and make it to the playoffs in one of the toughest divisions in baseball this year.
Aramis Ramirez – Chicago Cubs
I’m a strong believer in the fact of the MVP should go to the best player on the best team. I believe Aramis Ramirez is the best player on the best team and that he is the most consistent slugger on their team, but his numbers and play don’t speak for him being the best player in the National League. I feel like the Cubs are great as a team without one player who is a superstar standout. Ramirez, or any Cub’s numbers aren’t MVP-esque.
Carlos Delgado – New York Mets
He came on strong late in the season. However is team didn’t. But it wasn’t because of him. Practically all his offensive numbers increased since the All Star Break. But Delgado isn’t going to win it this year.
So with all this being said, I still feel that Manny Ramirez sparked his team, more than just statistically, to surge in the late part of the season and win their division. I feel like he should be strongly considered for this year’s NL MVP Award.
I know a lot of you will disagree. If you do, I want to hear it. Leave a comment of who you think should win it and why. Or tell me why you think Manny should NOT win the award. I would like to hear everyone’s thoughts.