Skip to content
Let Me Be Frank With You Uncategorized
April 14, 2010 Frank

How about you fix your addiction to third person ranting? Despite the fact that this weekly blog entry is titled “Let Me Be Frank With You…”, nothing quite annoys me quite like someone speaking about themselves in the third person. Over the years, my only irk with Tiger Woods was hearing him scream “Tiger!” when he [too many inappropriate references come to mind] hit a bad shot. And then this happens. It’s unreal that is how he chooses to vocalize his anger. A simple “dadgummit” would have done the trick. Where’s Chuck Norris when you need him? Tiger deserved a nice roundhouse kick to the face after that selfish rendition of a temper tantrum.

You have to see this 5 year old play baseball.

I hate to put back to back videos up on here because people telling you to watch YouTube videos has become such huge part of pop culture over that past few years it gets kind of old after a while. I feel like I’ve seen every video that was ever filmed or series of still photographs with emo music in the background. The worst are the ones where people get  their arms chopped off or something else unbearably painful to watch. Why do people like to watch that stuff? Anyway, umm, watch that video. That kid is unreal. Back to back hypocritical paragraphs by Frank. Yes. 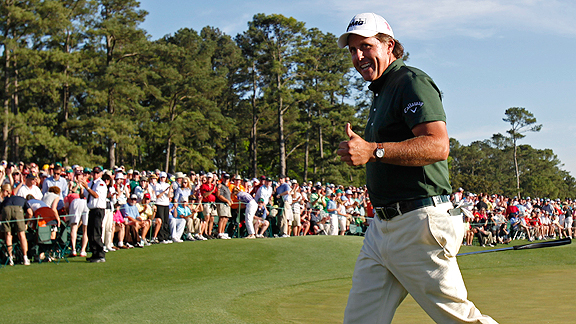 I am legally blind after witnessing Phil Mickelson remove his ball cap.

Sorry, I looked online for at least 10 minutes trying to find a good picture of what I’m talking about but couldn’t. It was a true shot to my nerd ego as I am usually a fantastic Googler. But if you are reading this garbage for some odd reason you are more than likely a sports fan. And if you are a sports fan you were probably watching the final round of the Masters on Sunday. Well, every time they cut to Phil I couldn’t help but notice whatever shirt he was wearing at the time wasn’t quite as long as the one he had been wearing while training. How you ask? Well let’s just say I haven’t seen such contrast between two shades of skin tone since I went to the park with this guy. Then he won and removed his hat revealing a rectangular patch of white forehead skin. It was gross & extremely detrimental to my vision. Here’s hoping a gift card to Sun Tan City was a part of the winner’s package.

Beef jerky and horrendous hair do not mix.

I know we tweeted about it (or at least retweeted Garrett Walker) but a picture is worth a thousand words. Ben Roethlisberger came out and spoke recently about his sexual assault allegations…looking like that. He’s always had a mullet and I always just thought it was funny. What you see up there, that’s not funny. It’s vile and I feel like taking a shower after every time I look at it. It’s so bad Ben lost his beef jerky gig as a result. Luckily, he always has that whole “football” backup plan for misfortunes like this.

I’m Frank Ford, and I am a Houston Astros fan.

Go ahead. Laugh at me. I’ll be the one laughing when the Big Puma single handedly turns this 0-7 start into a World Series ring. Mark my words. This explains why I literally have not watched a single pitch of an MLB game so far this year. Have you? I know Austin has. The kid spent one of our TWO nights in Vegas attending a Dodgers spring training game…by himself. I tell you what, Vegas really does bring out the wild side in everyone.